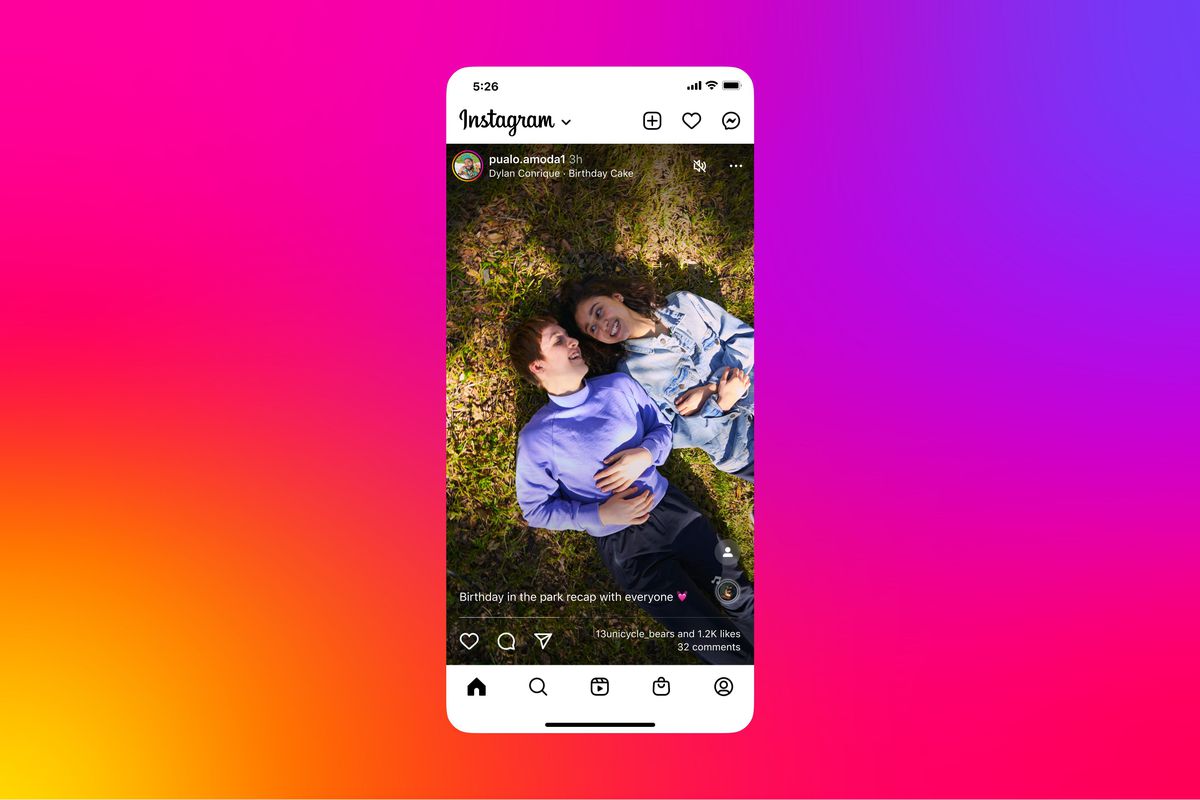 Instagram is competing with TikTok for both users and creators, especially with short-term video formats. Now Instagram is launching a fullscreen feed layout that is very similar to TikTok's design and is meant to boost Instagram Reels even further. Join Kolsquare for a closer look at Instagram's recent updates and monetization strategies.

Competitiveness is essential in a market driven by supply and demand. For this reason social media platforms need to keep a close eye on their competitors and analyze which features appeal to users. Consequently, it is not surprising that the same tools are adapted or similar features are used.

TikTok, with one billion active users in 2021, is one of the fastest growing apps in the world, focusing primarily on entertainment. Moreover, with its ease of use, anyone can create and share creative content with a global community. The company’s DIY advertising tools show that marketers can potentially reach 970.2 million users aged 18 and older in the process. But back to Instagram’s counterpart: Reels.

First tested in Brazil under the name “Cenas,” Instagram Reels was finally released in over 50 countries worldwide on August 5, 2020. Today, Nike, like many other brands, enjoys an average of 4.6 million clicks per reel. While 87% of Genz Z users agree that Instagram Reels is basically the same as TikTok, the launch of the new feature in India has increased downloads by 11.4%. To be more specific, 800,000 more people consequently picked up Instagram on their phones.

The 22% increase in engagement is particularly attractive when compared with regular video content. Which is why 70% of marketers are also looking to increase their investments in Instagram reels and short-term videos in general. As recent data shows, Khaby Lame has the most viewed Instagram reel with 268 million views.

During its first quarter conference call in 2022, Meta announced that users now spend 20% of their time spent on Instagram watching reels. In addition, videos account for a total of 50% of the time users are on Facebook.

Instagram's fullscreen in the test phase

As previously announced, Instagram’s latest test brings it even closer to TikTok graphically, as TechCrunch reports that a vertical full-screen mode will soon appear on the home screen. This immersive feature focuses on the strategy of “bringing videos to front and center,” Instagram chief Adam Mosseri said on Twitter. This seems to be a guiding principle at Meta in general these days. With this new push, it becomes clear once again how much Instagram is trying to draw TikTok’s attention. Some Instagram specifics remain (for now): While users scroll through a full-screen Home Feed, the navigation bar at the bottom of the screen stays the same. Consequently, they can still switch to “Discover”, “Reels”, “Shop” and their personal profile. The icons for switching accounts, creating a post, direct messages, and notifications remain unchanged.

Although the test image Instagram released doesn’t show where the Stories will be displayed in the future, an Instagram representative assures us that this is only the case in the sample. If you scroll past the top of the feed, the Stories icons would disappear and users would be able to fully immerse themselves in fullscreen mode.

The fact that Easy-Access to Stories still exists is essential for Instagram, as the feature is currently (still) the app’s biggest money-maker. In this case, the infrastructure for ads shown between creative content is better developed. Meta is planning more monetization opportunities for Instagram Reels as well, but this will likely take several years to develop.

In general, shorter videos are more difficult to monetize, as mid- and pre-roll ads are not really possible here. Nevertheless, Instagram is already testing the options creators might have in the future.

Alessandro Paluzzi shows a way how overlay ads could be integrated into Reels on Twitter. This would allow creators to monetize their content directly through ads in their clips without having to go to great lengths with brand deals and sponsorships.

In addition, Mosseri emphasizes that Instagram wants to reward original content in particular with a new algorithm in his Twitter statement. He states, “If you create something from scratch, “you should get more credit than if you are re-sharing something that you took from someone else. [… We want to] make sure that credit goes to those who deserve it.”Instagram is also now testing its own templates for editing reels by allowing formats to be borrowed from other videos on the platform. The feature is reminiscent of TikTok’s template tool, as Instagram creator screenshots show. Developer Alessandro Paluzzi tweeted about a version of this feature back in January of this year, which he discovered in a version of the app’s code.

The difficulty of monetizing shorter videos remains the biggest challenge for TikTok. If Instagram is able to find a simple and efficient method, the app could surpass the Chinese giant in the competition for users and creators.

Youtuber and TikToker Hank Green explains in a video how payment methods for creators vary between apps. He praises YouTube’s affiliate program, which is extremely effective because about 50% of the platform’s profits go to Creators, which in turn is a huge economic driver.

TikTok, on the other hand, only maintains a Creator Fund, a pool of money, so to speak, that is provided to Creators on certain bases set by the app each month, such as views, engagement or watch time. But while TikTok earns more, creators earn less.

Instagram pays more, he said, yet creators are paid based not on a percentage of revenue, but on what attracts people to the platform. This, in turn, is quite transparent, he says. Green appeals to creators to talk about money instead of algorithms, because moderation and monetization are the true problems of social media.

Google is also competing with TikTok. Through YouTube Shorts, the platform generates 30 billion views per day, according to CEO Sundar Pichai. Just a day after Google announced it would test ads on YouTube Shorts, Meta CEO Mark Zuckerberg also followed suit, stating  that the company was optimistic about improving this in the future during their first-quarter conference call.

Previous The Kolsquare Guide on how to track your Influencer Marketing campaigns
Next Interview with Pierre Baryla, founder of Hello Jack