Home / Resources / Blog, News / Live Audio Rooms: is Facebook announcing its return to the forefront of the podcast scene? 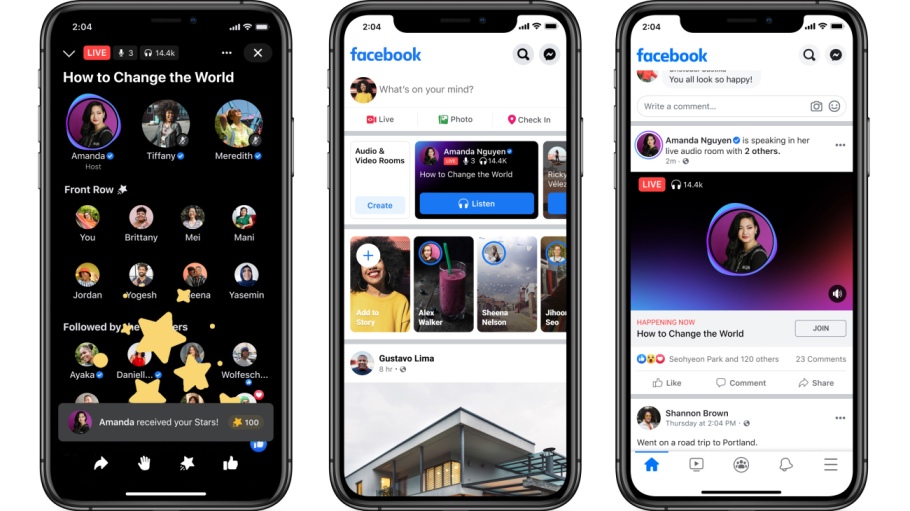 Live Audio Rooms: is Facebook announcing its return to the forefront of the podcast scene?

Just like the success of video driven by YouTube, audio is now experiencing a spectacular boom. A major trend since the first lock-down, this format has never been so much in the news and it's not about to stop.

Users like audio because it is considered less intrusive. It has also helped to strengthen ties during confinement; voice notes have since been introduced alongside text messages.

On the supply side, the audio landscape is diversifying. Podcasts, which are increasingly numerous, now coexist with digital audio, a new service offered by social platforms. The latest example is the giant Facebook, which is investing in the format by offering a live audio discussion tool, and soon podcasts.

87% of French people listen to audio every day

According to a survey conducted by Harris Interactive, 87% of French people listen to audio every day. It must be said that this format has the advantage of being able to be consumed everywhere: on the way to work in a car, on a mobile phone while travelling or directly on a computer at home. No matter where or how you listen, audio easily takes the listener with it and engages them more than other media.

For brands, it’s also a chance to be remembered: 75% of listeners remember a brand name spoken in audio content.

The rise of podcasts

Audio is now synonymous with podcasts. In 2020, 900,000 podcasts were created worldwide, i.e. almost three times more than in 2019 (source: Chartable). In France too, the podcast has found its voice:

The emergence of social or conversational audio

Alongside podcasts, the rise of social or conversational audio responds to a strong demand for virtual spaces for discussion. The idea is to spend time together by voice. In a very simple and natural way, voice messages make it possible to keep a link closer to reality than text. They exploded on Messenger and WhatsApp during the lockdown. A new trend that logically pushes the market to adapt. To go further, and still in this idea that live chat creates a special bond, new services have emerged, such as Discord or ClubHouse.

The death of ClubHouse?

A meteoric rise in a short time

ClubHouse was undoubtedly at the origin of the social audio trend, but it is now disappearing from the landscape, as quickly as its rise. The invite-only audio application quickly became the talk of the town as many of us tried to gain access to its “Rooms” to create or listen to conversations.

In one year, it has been downloaded over 32 million times. In February 2021, it reached an exceptional peak with 9.5 million downloads. But the following month, the situation took a new turn with just under 3 million downloads in March. Then, 900,000 in May 2021.

During these somewhat chaotic episodes for the application, some major players decided, in turn, to get into the audio business.

In direct competition with Clubhouse, the Facebook Live Rooms is now accessible in all countries where Facebook is present. Described as ageing – the average age of its daily users is 45, compared to 23 for TikTok – the platform is taking advantage of the opportunity to give itself a facelift with audio. It is also an opportunity to offer content creators new means of expression.

How does it work?

Like ClubHouse, the Facebook “rooms” or audio rooms are places for live exchanges with other users, directly from the platform. Each participant can intervene by raising his or her hand or simply by adding a reaction. The Live Audio Rooms are accessed directly from the Facebook News Feed; the user can listen to a podcast while continuing to browse the social platform.

Facebook has not finished making news about audio and is already testing new features in the US.  Shortened audios, similar to Instagram Reels, and podcasts will soon be added to the platform’s features. An Audio hub will bring together all of the group’s audio features: from podcasts to live audio to short-form audio.

On Twitter, Twitter Spaces are voice conversations between users of the platform with at least 600 followers. Like Live Audio Rooms, Spaces allows users to chat or join a conversation to exchange and react on a specific topic. Twitter is considering the addition of an online ticketing service, offering a number of seats and prices set by the host.

Spotify launched Greenroom in March 2021, joining Clubhouse’s competitors in the live audio chat sector. It is a standalone application, to be downloaded outside of Spotify. The principle remains the same as for ClubHouse and the others: create or participate in rooms. The participant can request to speak or chat directly in an audio chat room.

Previous Transparency, a key issue for Influencer Marketing
Next How to improve your engagement rate on TikTok?